The Manor House from 1665 between fjord, glacier, mountains and waterfalls 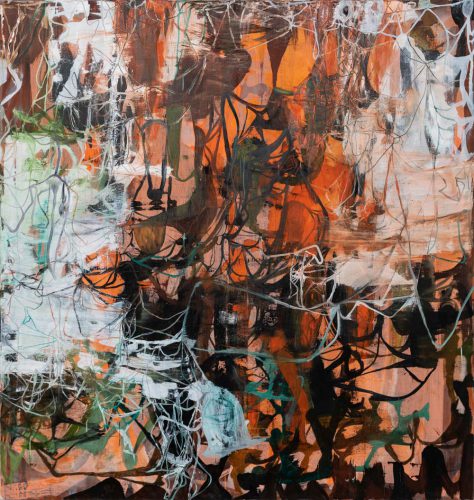 Olav Christopher Jenssen (1954-) lives and works in Germany, and today he is quite as much a part of the German art world as the Norwegian. He began his career painting figurative pictures, but during the 1980s he created paintings that oscillate between figurative and non-figurative images, without being either or. Neither is he a romantic with a desire to paint the inexpressible, but an artist who is interested in what, in fact, can be conveyed in colour and form, rhythm and brushwork. This said, he also explores the limits of what can be expressed, and his artistic production of graphics, drawings, paintings, relief work and installations throw light on the process that carries expression. Primarily, this takes place on the surface, but disappears into what seems like deep space located far away or far below. Here, we sense the boundaries of language. Nonetheless, language teases him, and since the 1990s the painterly process that we can observe from one layer to the next is accompanied by words and letters. While we are able to identify letters of the alphabet, we are often unable to recognize the words, since they do not correspond to words from known languages. Nonetheless, we sense that the artist is trying to tell us something, even though the words are inadequate and gradually slide into forms and colours.

This is just one aspect of Jenssen’s work. Recently, to take another example, he has illustrated poems by Jon Fosse. Although to say illustrate is not quite correct, since, more precisely, he attempts to place himself in the space between words and pictures. Moreover, he does so in a distinctive style that catches Fosse’s poetry particularly well. Some of these pictures will be exhibited at Rosendal.”

Buy tickets for the concert and opening of the art exhibition the 21. May here.