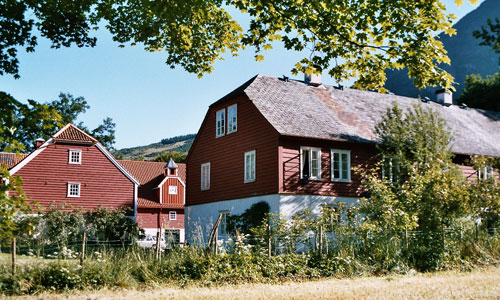 Please note that because of the Coronavirus crisis accommodation at Baroniet Rosendal is unavailable.

Accommodation with breakfast in romantic surroundings at the Home Farm. Simple but comfortable overnight accommodation in original buildings from around 1850 with 24 rooms and 40 beds. The Home Farm has 5 single and 9 double rooms, in “Fruehuset” 300 m down the road there are 2 single rooms and 6 double rooms. In some rooms, we may provide extra beds.

“Fruehuset” (“the Ladies’ house”) is situated on the other side of the field, down by the river. The rooms are of similar kinds as at the Home Farm, in romantic surroundings and shared bathrooms in the hall. There is also a lovely little garden with benches in front of the house, away from the tourists. 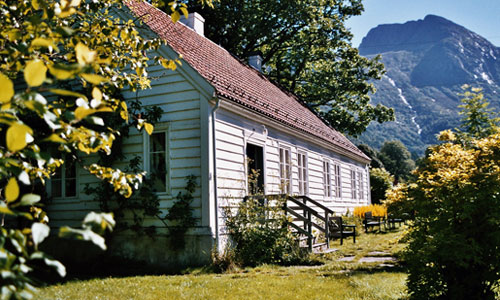 Breakfast is served at the Home Farm, a nice little morning walk of 300 metres along the river. Please tell us which house you prefer a room in when you book. 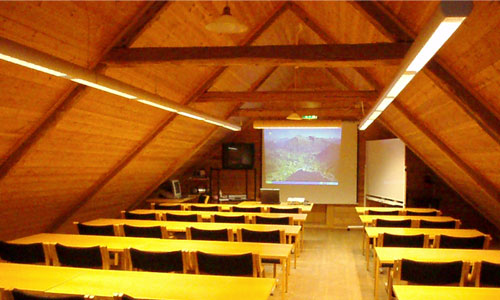 There are two seminar rooms at the Home Farm. The big meeting room is suitable for up to 40 persons and is equipped with broadband, flipchart, projector, whiteboard, TV and video.

There is also a group room suitable for up to 10 -15 people: 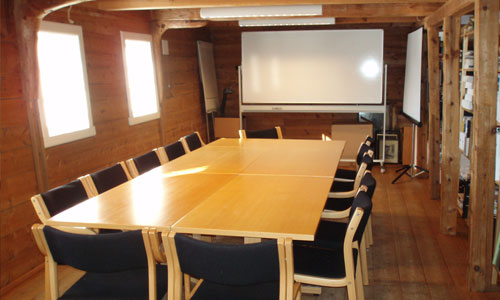 Dinner is available for individual visitors in Storakjøkenet during the season. The Chef makes use of herbs and vegetables from the Manors Kitchen & Herb garden. For table reservations, please call +47 53 48 29 99. 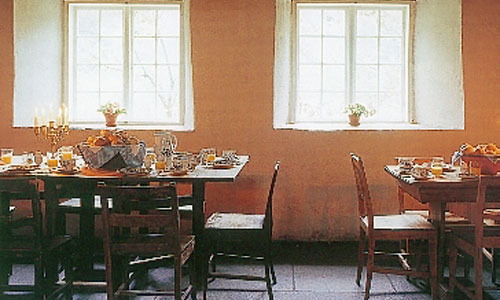 Please book accommodation, meetings, make table reservations or other requests by email [email protected] or phone +47 53 48 29 99. When we have to leave the office for guided tours etc. there will be an answering machine – please leave a message so that we can call you back as soon as possible!

Give a nice stay at Rosendal as a present! See the cultural program for combination tickets with accommodations, 3-course dinner in The Tea Room and cultural events if you would like the gift to be valid for a special date or a particular event.

The following gift cards are valid throughout the 2016 season. 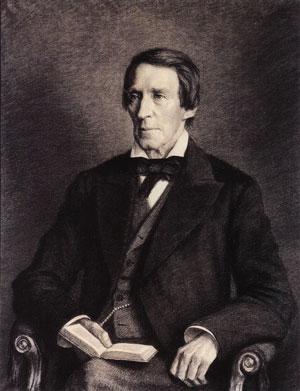 In the 1850s, the Heir to the estate Baroniet Rosendal, Marcus Gerhard Hoff Rosenkrone, (1823-1896) established Rosendal Avlsgard as an example farm for sheep and horses. The farm was of major importance for agricultural rearing and breeding work in the district. In 1875, “Rosendal Høiere Almue Skule” was established. Teaching was financed by the Heir, who taught foreign languages, history, physics and geography.

Fruehuset (“the Ladies’ house”) was built around 1860 to the widowed wife of the priest, Karen Unger, and the daughters Pauline, Bolette and Nanna. Nanna was later married to Hans E. Kinck, while the three single women stayed in Fruehuset under the protection of Marcus Gerhard Hoff-Rosenkrones to his death. The house later got the name Fruehuset after mrs. Karen Unger. Marcus Gerhard and his siblings got a special relationship with vicar Elias B. Unger at Malmanger clergy house, and his daughter Kathinka, who was Marcus Gerhard’s great love. Unfortunately, Kathinka died in 1853, only 18 years old. After the death of Kathinka, Marcus Gerhard never fell in love again.